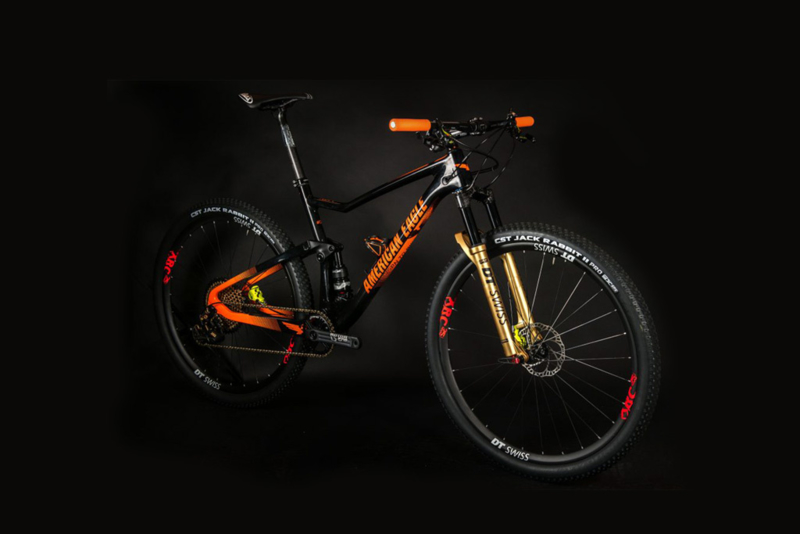 The Flow from American Eagle is a race oriented and tested Full Suspension Mountain bike. In 2018, the CST Sandd American Eagle Mountain Bike Racing Team tested the first bright orange prototypes during their international and national competitions. These tests were successful and good results were achieved by the Team driving the Flow. The young Dutch rider David Nordemann won the bronze medal with the Flow Full Suspension prototype mountain bike during the World Championships in Lenzerheide, Switzerland.

Some improvements, as suggested by the riders and mechanics of the CST Team, discovered during testing and work on the bikes, were implemented before the Flow was taken into production for both the Team and for sale. The graphic design of the Flow is based on the design of the American Eagle Atlanta 2.0 hardtail. The straight stripes were replaced by smooth lines, which gave rise to the name Flow.

The lightweight and rigid frame (1840 grams for a medium 17.5 inch size) is built for a 100 mm front and rear suspension. Reinforced carbon in the bottom bracket makes the frame stiff. The natural flexibility of the carbon in the rear fork also gives the Flow its rigidity.

For orders above EUR 100,00 we don't charge shipping costs.

For orders from non-EU countries we invoice without VAT. Please contact us via contact@fidder.cc for more details.